The team here at LifeVac Europe are extremely proud to share wonder news that LifeVac was used to save another child in a choking emergency.

A hero mother leapt into action while preparing lunch for her two sons, when her two year old little boy began choking on a plantain chip that became logged in his airway.

His mother grabbed him out of the chair and began delivering back slaps in hopes this would dislodge the hard piece of dried chip/crisp. Unfortunately her first aid attempts were not enough to clear the obstruction. She then remembered she kept a LifeVac where her children eat.

After laying him down on their sofa, one application of her LifeVac and the chip/crisp was dislodged and her little boy started breathing again. 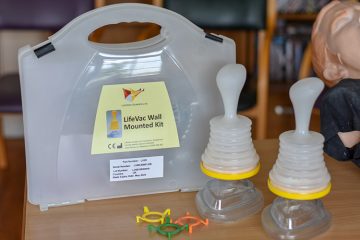 On the 24th of July 2019, leading UK residential care and nursing home operator, Runwood Homes, have partnered with LifeVac Europe, to equip staff with the only non-invasive airway clearance device to use in choking emergencies. The vacuum face-mask system operates with a simple place-push-pull handle manoeuvre to remove blockages by suction, 3 times greater …

Little Boy Saved with LifeVac in a Choking Emergency …