It was reported to us that a 2 1/2-year-old little girl choked on ice-cream. The ice cream was harder than normal, she was unable to swallow it and quickly turned into a completed obstruction of her airway. The abdominal thrusts were attempted but failed. The child’s grandfather ran for the LifeVac® device, put it together, and handed it to his daughter. On the first application by the child’s mother, the rescue device successfully dislodged the airway obstruction.

Below is the mothers testimonial: 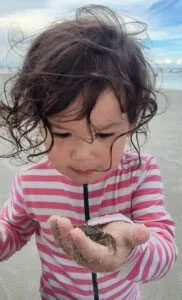